FARO Laser Scanner – a valuable tool in the fight against crime

The world’s law and order agencies have a long history of embracing new technologies that can help them to detect and solve crimes; aid in the apprehension of suspects and allow the clear presentation of prosecution evidence. In addition to the adoption of dedicated equipment that is designed specifically to assist in the above areas, for example fingerprinting systems, advancements in other fields, such as DNA techniques, are constantly being harnessed in the relentless fight against crime. An advanced technology that is being increasing exploited and is now delivering remarkable advantages to the world’s police forces is 3D laser scanning.

FARO Measurement Systems is acknowledged as the global leader within the field of 3D laser scanning and has established a reputation for supplying a range of high-quality, easy to use equipment that is ideal for use within the challenging area of Forensic investigations. FARO 3D Laser scanning systems and software enables the rapid gathering of evidence and the authentic, highly detailed graphic reconstruction of crime scenes. In addition, the resulting, realistic presentations allow jurors to achieve an in-depth, objective understanding of crime scenes.

The portability and speed of operation of FARO 3D laser scanning systems makes them the ideal technology for demanding forensic work, as they allow important crime scene evidence to be collected and documented more precisely and considerably quicker than traditional forensic methods. In addition to their enhanced accuracy, FARO 3D laser scanning techniques are also less intrusive than previously used equipment that had a greater potential to compromise crime scenes. 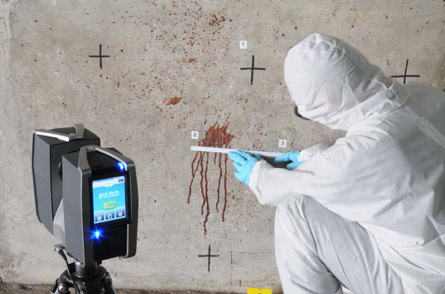 FARO 3D laser scanners provide a comprehensive method for the processing and documenting of crime scenes. Previously a subjective decision had to be made as to what features of a complicated environment needed to be recorded. Now, Laser scanners are able to accurately document entire scenes in an all-inclusive method. A typical, rapid 360° scan of a crime scene allows Forensic Investigators to capture millions of data points and to secure measured details down to millimeter levels of accuracy. Once generated and stored, the resulting authentic, graphic reconstructions facilitate further detailed analysis and examination, as well as allowing ‘virtual’ crime scenes to be revisited at any time in the future.

Having first assisted Forensic investigators in the documentation process, photorealistic, 3D crime scene models are then able to provide excellent courtroom presentations and enable full-colour virtual ‘walk-throughs’. These accurate, life-like graphic reconstructions prove invaluable to juries’ understanding of crucial evidence and are extremely helpful in enabling them to reach a just verdict.

As the largest municipal police service in Canada, the Toronto Police Service (TPS) continually evaluates and adopts new technologies and techniques to help improve the service it provides to the 2.7 million citizens of Toronto. In 2010 the Forensic Identification Services (FIS) unit of the Toronto Police became the first Canadian forensic unit to deploy a laser scanning system for Crime Scene documentation when it acquired a FARO Photon 120. 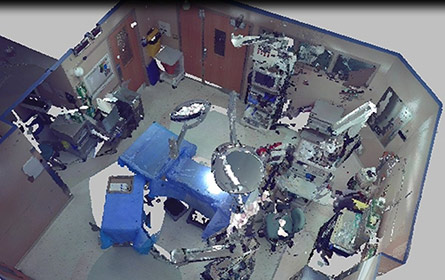 In October 2012, FIS was tasked to prepare diagrams and 3D imaging for a major investigation involving an anesthesiologist accused of sexually assaulting 21 women whilst they were under conscious sedation and undergoing surgical procedures. When the matter came to trial in January 2013, the Crown submitted that the accused was able to commit the assaults unseen during the procedures due to the presence of the surgical screens and layout of the operating rooms; and that neither the positioning of the patients, nor the limited movement of personnel within the operating rooms deprived the accused of the opportunity to commit the assaults undetected. In response the Defence contended that the incidents did not occur, asserting instead that the drugs that had been administered had caused the patients to hallucinate. In addition, the Defense took the position that the surgical screens in the operating room provided only limited concealment, and that if the assaults had taken place, other members of the clinical staff would have been able to observe them.

As one of the first witnesses called to the stand, Greg Schofield, a Crime Scene Drafting Technician with the Toronto Police Service FIS, testified that to gather evidence, hospital staff were asked to set up each of the involved operating rooms with equipment and screens to represent a “typical” set-up for each of the different procedures in question. The operating rooms were then photographed and scanned using a FARO Focus3D scanner in order to generate the eye and high level video fly-throughs of each surgical room that were tendered as Exhibit #4 – Video Laser Scans. As Sunday evenings were the only time that all eight operating rooms were not in use, Mr. Schofield also testified to how the eight crime scenes were comprehensively scanned in just 7 hours and that the amount of data collected, 4 or 5 scans per operating room, was used to clearly show the extent of the drapes that the accused was positioned behind.

Towards the latter portion of the trial, the ability to “revisit” the scene became especially important as, once the contentions regarding the drugs were refuted, the Defence’s emphasis swung towards the extent and position of the drapes and how they were insufficient to fully block the view of the surgical personnel present at the time of the assaults. This necessitated Mr. Schofield re-examining the data on short notice to create specific images and cross-sections along with obtaining specific dimensions of the screens and operating tables. He was then recalled as a witness to introduce the information to counter the Defence’s contentions regarding the screens and position of the tables.

After a trial spanning 8 months and involving more than 90 witnesses, in an 86 page verdict the judge addressed the second pillar of the Defence’s case:
64. – There was vigorous cross-examination about the accuracy and reliability of the photos and video [laser scans] on the question of whether the accused could have committed the assaults without being seen.  That question requires consideration of, among other things, the layout of the ORs, the height and width of the draping separating the sterile area from the non-sterile area, the positioning of the patients, and the positions and sightlines of the medical personnel.
67. – The weight of the evidence supports the Crown’s position that the best evidence of the [surgical] draping setups and general layouts is found in exhibit 4, video laser scans, and ex. 7, a book of photos….. The general accuracy of these depictions was supported by most if not all of the witnesses. I conclude that they provide a fairly accurate depiction of the typical setup for each of the procedures.
267. – The Defence submits that it is inconceivable that the acts alleged could occur in a busy operating room without anyone seeing or without resistance from the patient that would be noticed. I reject that submission as well. I have already explained that I consider the best evidence of the typical setups for the various procedures to be contained in the video laser scans (ex. 4), and the book of photos (ex. 7). Those exhibits persuade me that [the accused] was concealed behind a drape that was high enough and wide enough that no-one could see him without approaching and looking over the top of the drape.
854. – The evidence supporting guilt is overwhelming.
855. – I find [the accused] guilty on all twenty-one counts.

This is believed to be the first time laser scanning data has been introduced and accepted as evidence in a Canadian criminal trial, and as such has set a legal precedent. The fact that 3D Laser Scanning was relied on to help prove the guilt of an accused person illustrates the great potential that this advanced technology has to contribute to the administration of justice.

The FARO Focus3D is a high-speed Terrestrial Laser Scanner (TLS) offering the most efficient method for 3D measurement and 3D image documentation. In only a few minutes, this 3D laser scanner produces dense point clouds containing millions of points that provide incredibly detailed 3D color images of large scale geometries. Multiple scans from different positions can then be automatically placed to create a cohesive point cloud, resembling an exact measureable copy of even the most complex and large structures.

This point-cloud software for scanners is extremely user-friendly, from simple measuring to 3D visualization to meshing and exporting into various point cloud and CAD formats. Once SCENE has prepared the scan data, you can commence evaluation and further processing right away.

Scan projects can even be published on a web server at the touch of a button. The new SCENE WebShare feature allows easy access to laser scans with a standard Internet browser.